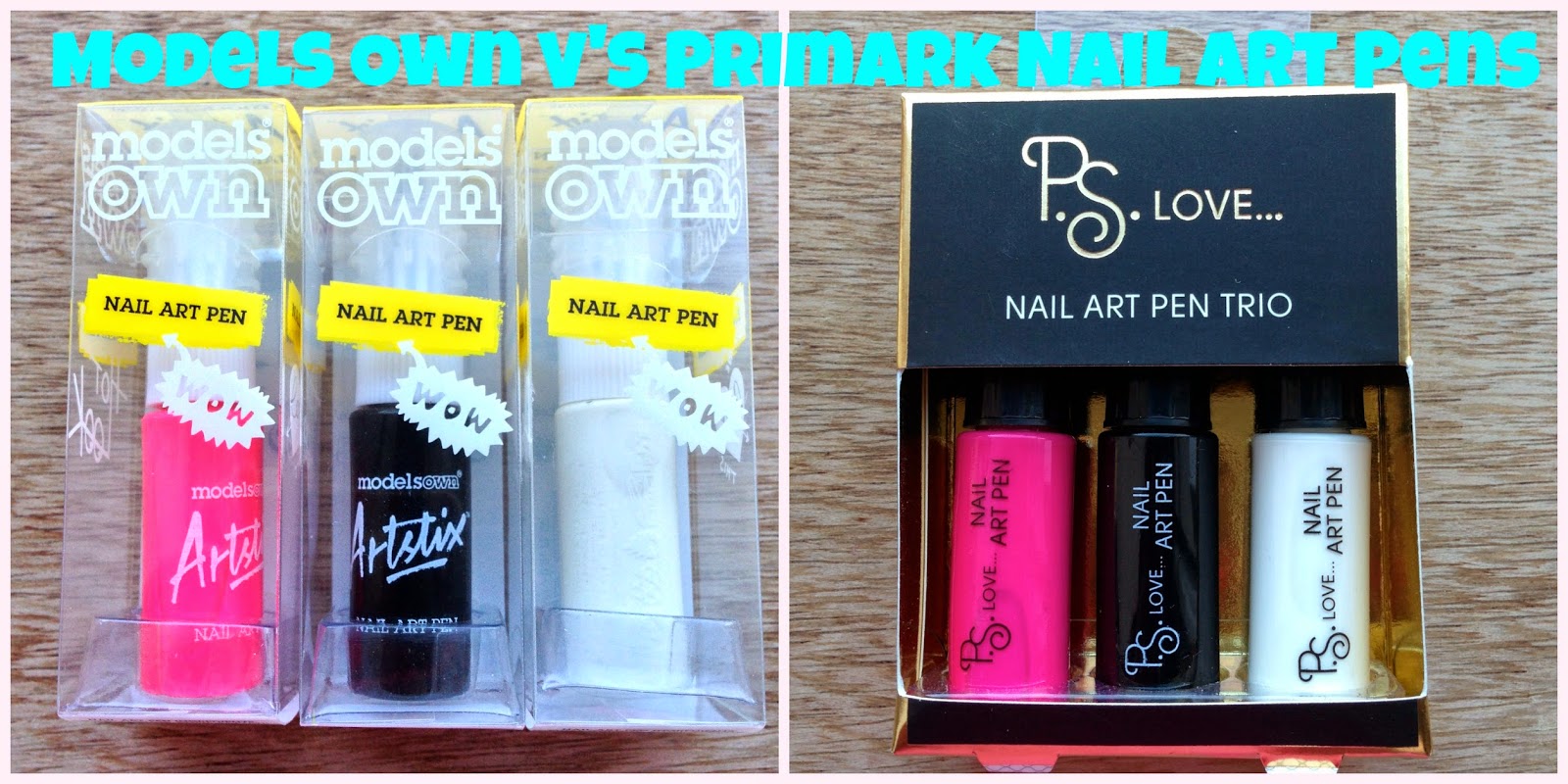 Today I have another comparison post for you, again I will compare 2 products claiming to do exactly the same thing but at a completely different price, today I am comparing nail art pens from the brand Models Own and from everyone's high street favourite Primark.

Primark recently launched a cosmetics line called P.S. LOVE, there are a whole host of make up and nail products amongst other things in the range but I saw the nail art pens and thought I would try them, since I had my easy Christmas nail art series on my blog I have really enjoyed creating nail art looks and have been asked for more so keep an eye out for those. I bought 4 of the Models Own pens in their 50% off sale back in February to create more looks, so I thought I would try the Primark nail art pens too and compare them for you and let you know my thoughts on them both.

Both brands are very similar in style and concept, I'd say almost identical.

Both brands have a dotting type nib on one end of the nail art pen and then a thin brush at the other end.

Both brands pens work by pushing the nib down a little to enable the product to come out at the nib end and unscrewing the lid off the brush end of the pen.

Both brands contain 6ml of product.

The Models Own pens come in 10 colours sold separately.

The Primark pens come in packs of 3 colours, there are 2 packs available. 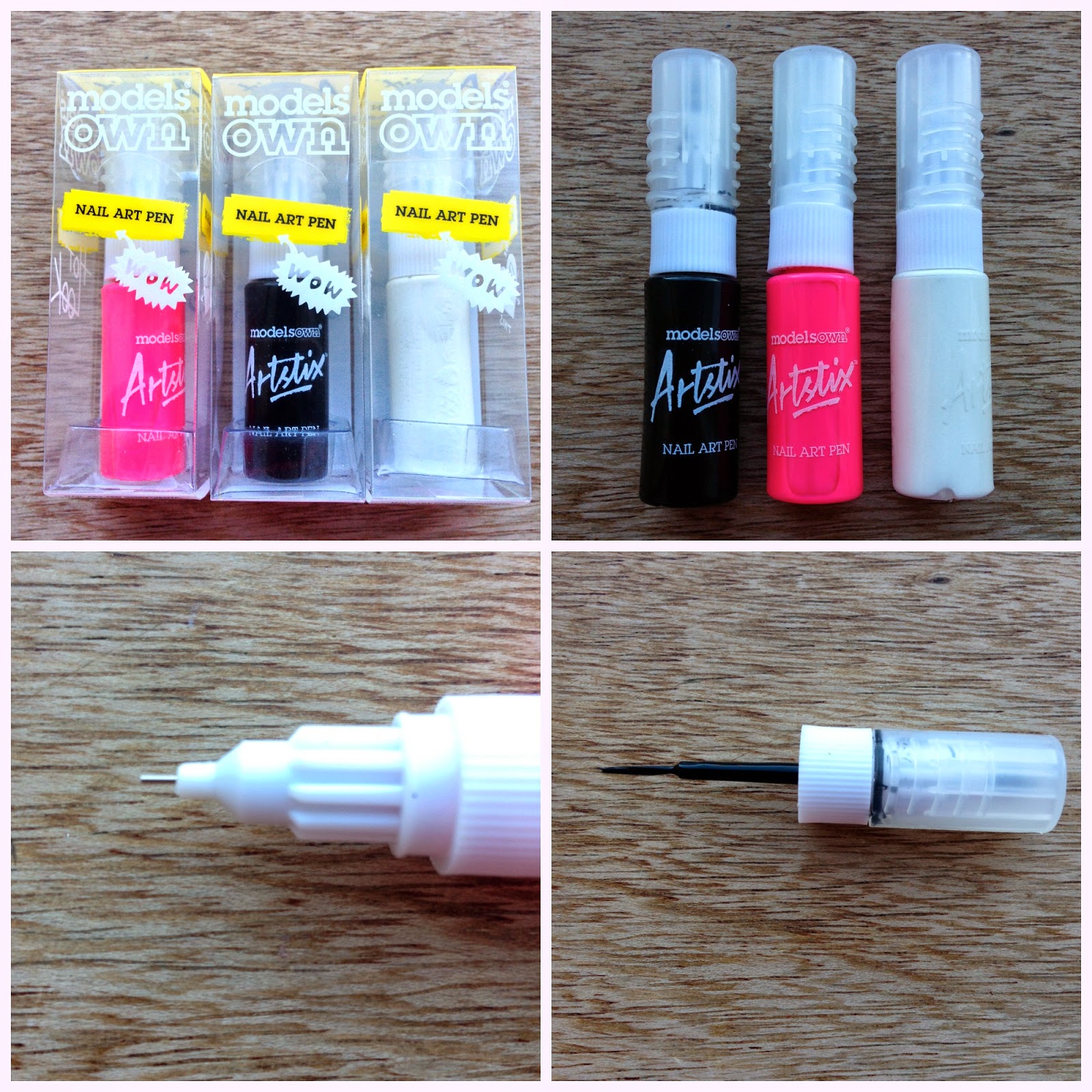 Models Own Nail Art Pens
Top ~ In boxes, out of boxes
Bottom ~ Nib on pen, brush on pen 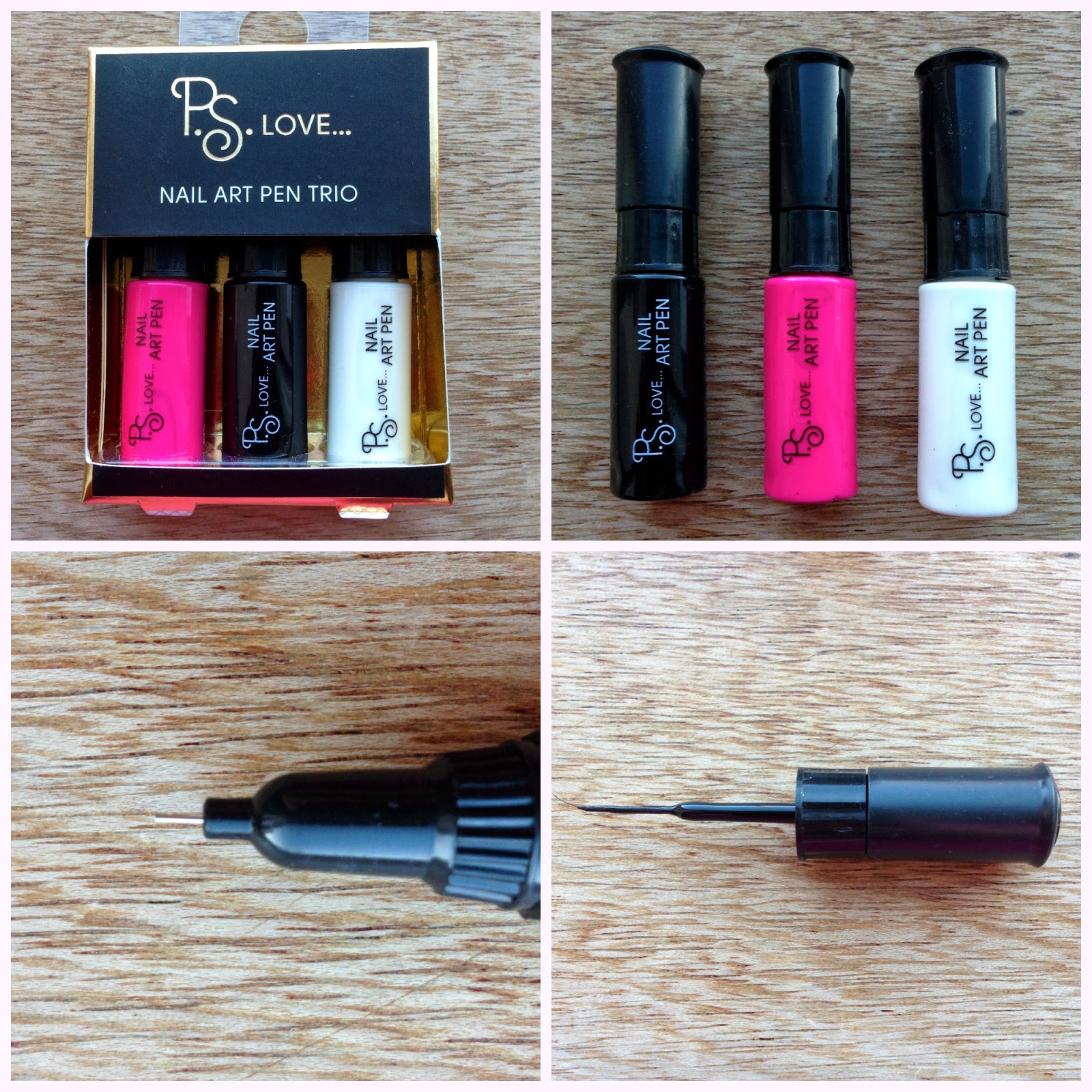 Primark Nail Art Pens
Top ~ In the box, out of the box
Bottom ~ Nib on pen, brush on pen

As you can see from both photographs, the pens are almost identical. The only real difference being the colour of the packaging and the pink pens being a different shade of pink.

Trying Out The Nail Art Pens ~

It was the first time I had used both brands of nail art pens, so this was a first impression of both brands as well as a test of how good the pens were.

To create the lady bird nail art I would need to use both ends of the pens. 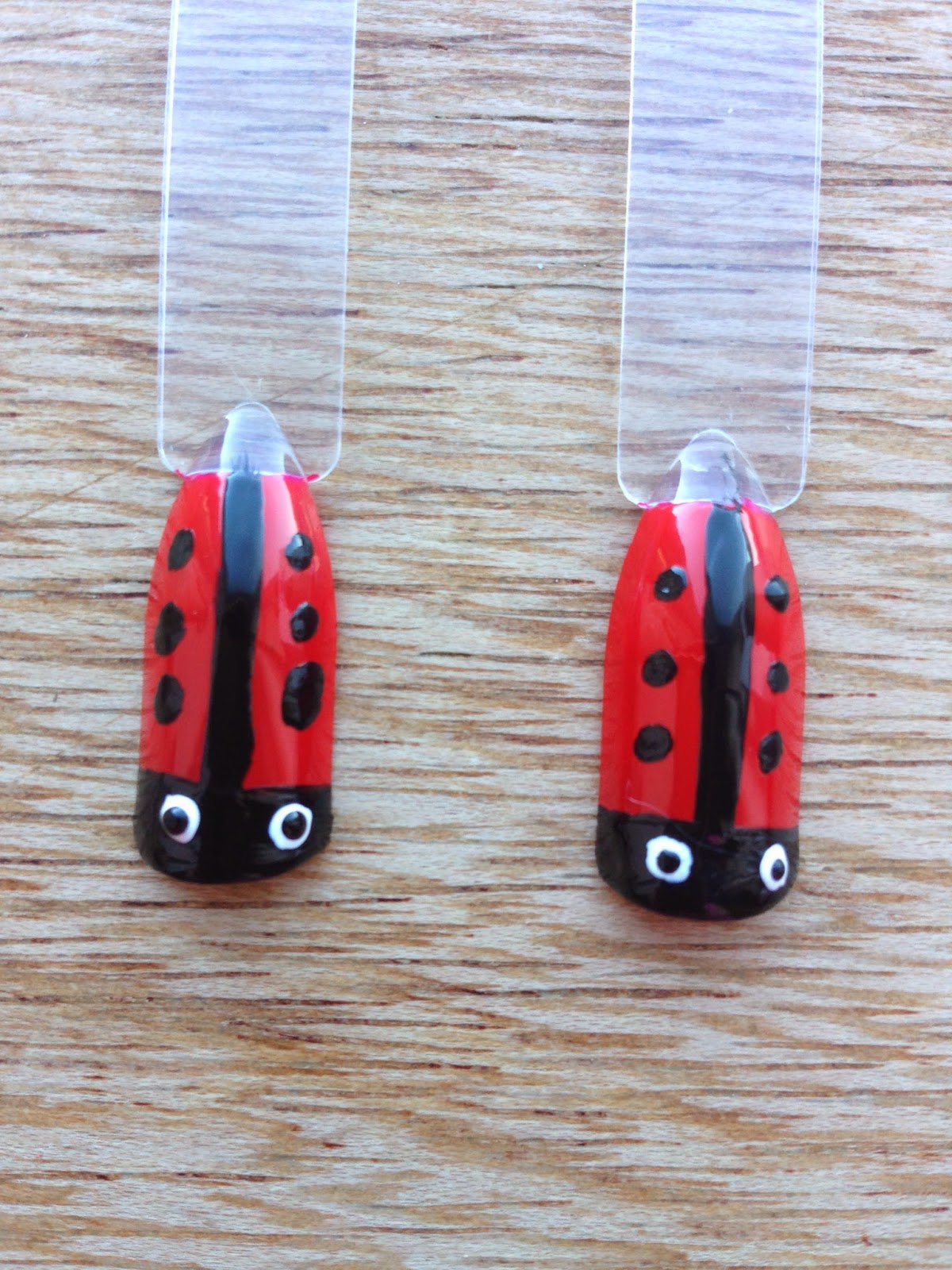 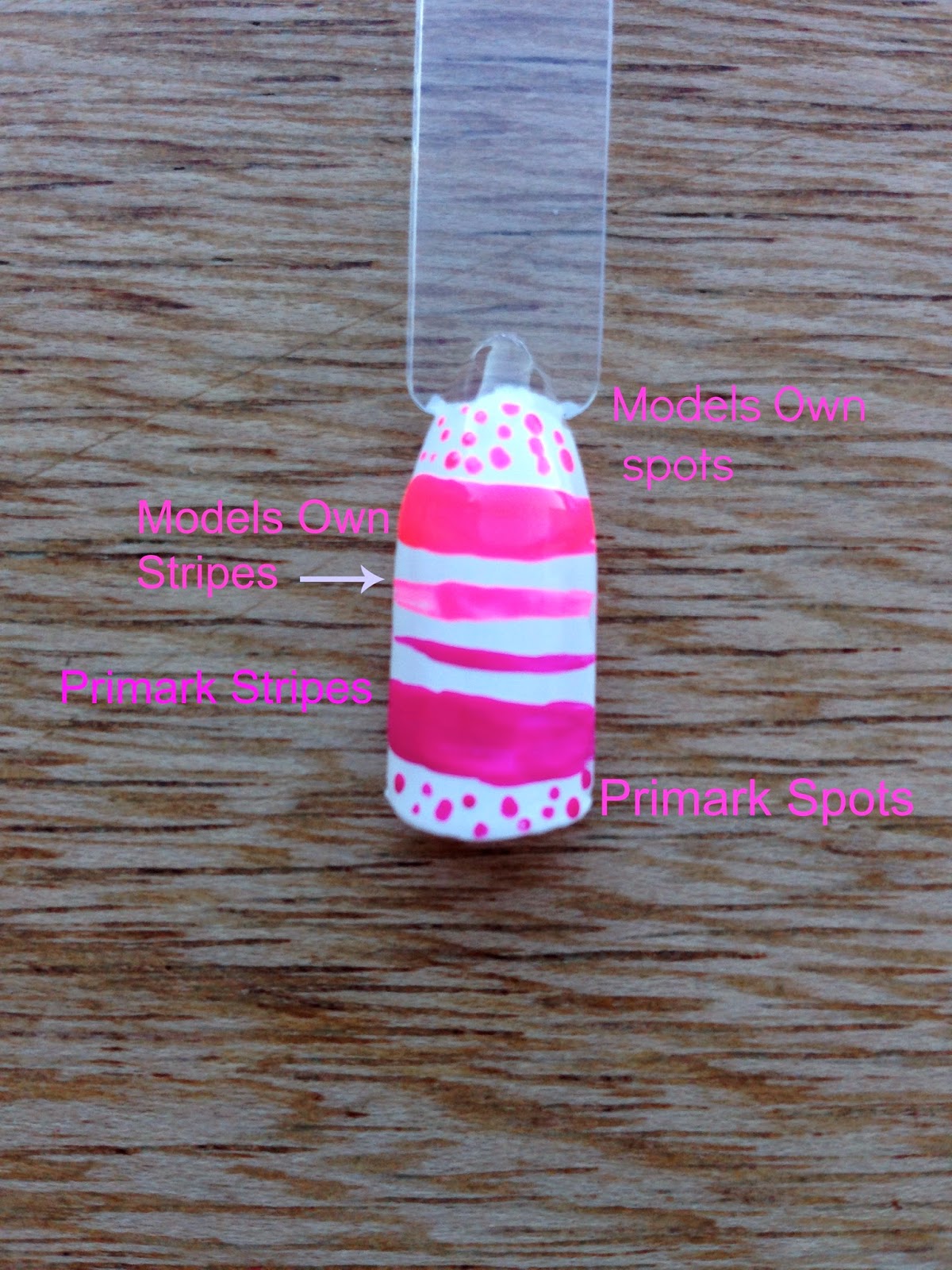 My Thoughts On The Nail Art Pens ~

The first thing I noticed with both black pens was that the bristles weren't even, both pens had a longer bristle poking out, it was worse on the Primark pen and it was nothing that a quick snip with some scissors wouldn't cure but it was noticeable and had I not snipped them off with the scissors I wouldn't have been able to use the pens.

After sorting out the brush end of the pens I started on my ladybird nail art design, I immediately found the Primark brush easier to use, it created a thinner line than the Models Own which didn't particularly matter for this design but if I were wanting to create a more intricate look I doubt I'd be able to do it with the Models own brush. The line the brush created was much thinner and precise with the Primark pen than with the Models Own.

Next I applied the spots to the ladybird, again the Primark pen won hands down over the Models Own, the thing I don't like about the Models Own pens is that to enable the polish to come out of the end of the pen, you push down slightly so the polish comes out, but it came out in a blob with more polish coming out of the pen than needed, creating a messy look. It was exactly the same with the white pen when I used it to create the eyes of the ladybird and the pupils.

You can clearly see from the photograph above of the ladybird nail art that the Primark pens gave a much neater finish than the Models Own pens. If you look closely you can see how raised the black of the pupil is when I'd used the Models Own pen than with the Primark one because of how much product floods out of the nib when pressed down.

When it came to trying the pink pens the first thing I noticed was the colour difference, the Models Own pen is much more of a neon pink and the Primark a fuchsia pink, on the Models Own Website the colour is described as pink and to be honest I wasn't expecting it to be neon, I was expecting more of a in-between pale pink and fuchsia if that makes sense? But it is neon, this isn't a massive problem to me but something I thought I'd mention.

Again the brush on the Primark pen was much thinner than the Models Own and to enable the polish to come through I pushed down slightly on the pen and the polish came out of the nib of the pen, but unfortunately again the nib flooded with colour from the Models Own pen. In the above photograph the stripes in the middle are 1 stripe across of the pen showing how thin they are and as you can see the Primark is a thinner stripe.

In my opinion the polish works just as well with both brands and I didn't notice one polish being any better quality than the other.

The Primark nail art pens are a definite winner for me, they are so much neater in their application, the brush is much thinner giving a neater stripe and the polish doesn't flood out of the nib. They are much easier to use than the Models Own pens and I would definitely recommend them over the Models Own pens any day of the week.

The only thing I would change is that maybe Primark sold the nail art pens separately and in some more colours, at the moment there are 2 packs of 3 pens available but hopefully that will change as the cosmetics line becomes more popular, but to be fair with the colours available you can create some lovely looks so it isn't too much of a problem.

If you are on the lookout for some nail art pens I would certainly head down to your local Primark, they do exactly the same thing but a much better job than the Models Own pens and are a fraction of the price, what's not to love?

Please feel free to leave me a comment, I love to read your thoughts and recommendations and I always reply to all my comments.