A Mascara To Rival The Benefit Roller Lash?

Unless you've been living under a rock for the last few weeks, I'm pretty sure you'll have heard of the new Benefit mascara, the Roller Lash mascara. I wrote a post about roller lash a couple of weeks ago  (read that post here) and gave my thoughts but since then I have discovered a new mascara from Maybelline, the Lash Sensational mascara.  I also wrote a review on that recently too (read the review here)

Both the mascaras claim to do very similar things and have a very similar wand so I thought I'd compare them for you because although they have quite a few similarities, one thing which is quite different is the price. The Benefit mascara sells for £19.50 and the Maybelline for £7.99 so as you can see, a noticeable difference, but is the Benefit worth £11.51 more than the Maybelline? Or will the lash sensational be a rival for the roller lash? Carry on reading to find out... 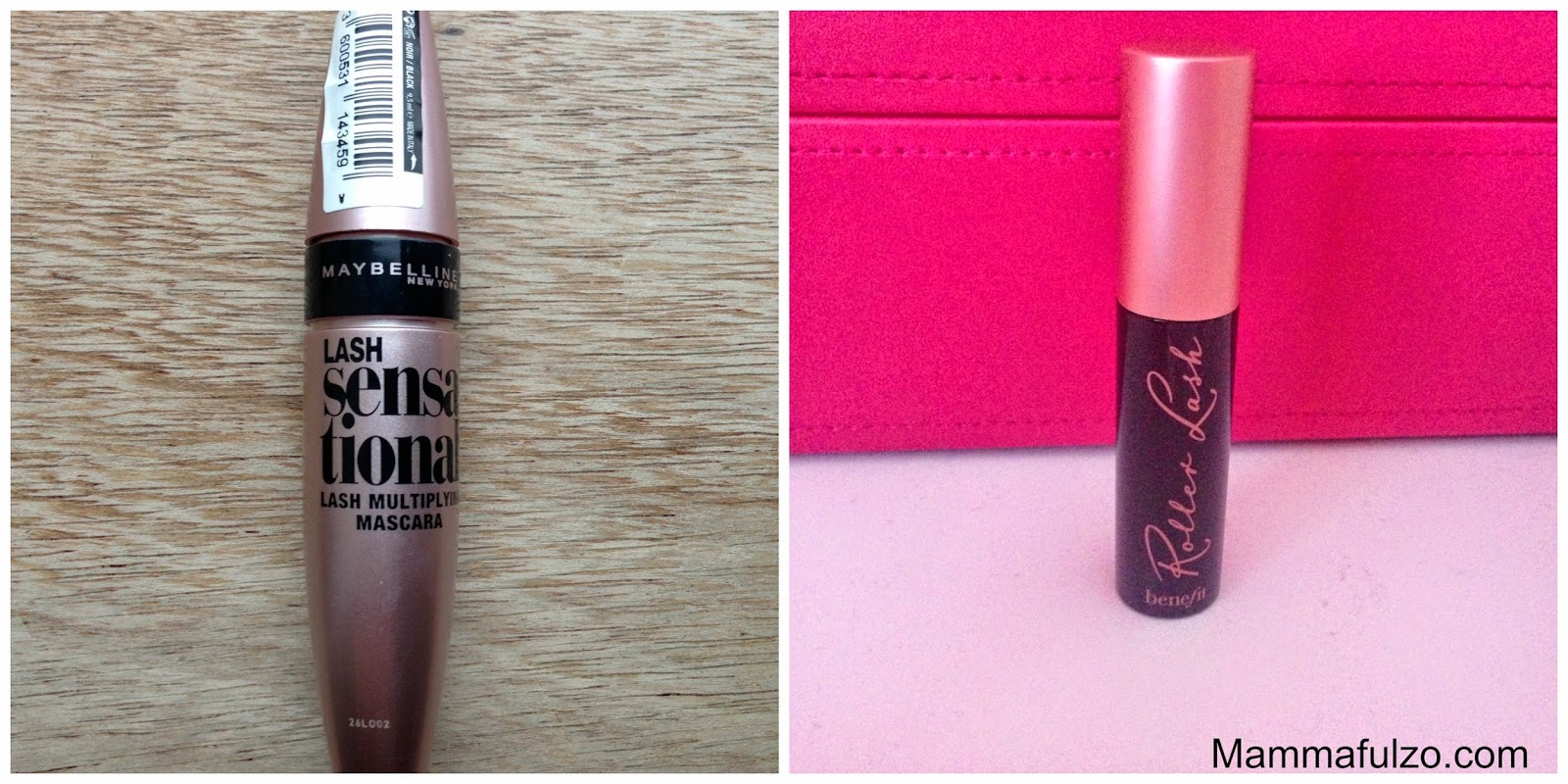 My Benefit mascara is a sample size product that came free with Elle magazine so it does look a little different from the full size product, but the packaging of both mascaras is still different so worth showing I thought.

Now for the wands, the wands aren't exactly the same, but they are similar as you'll see in the photographs below. 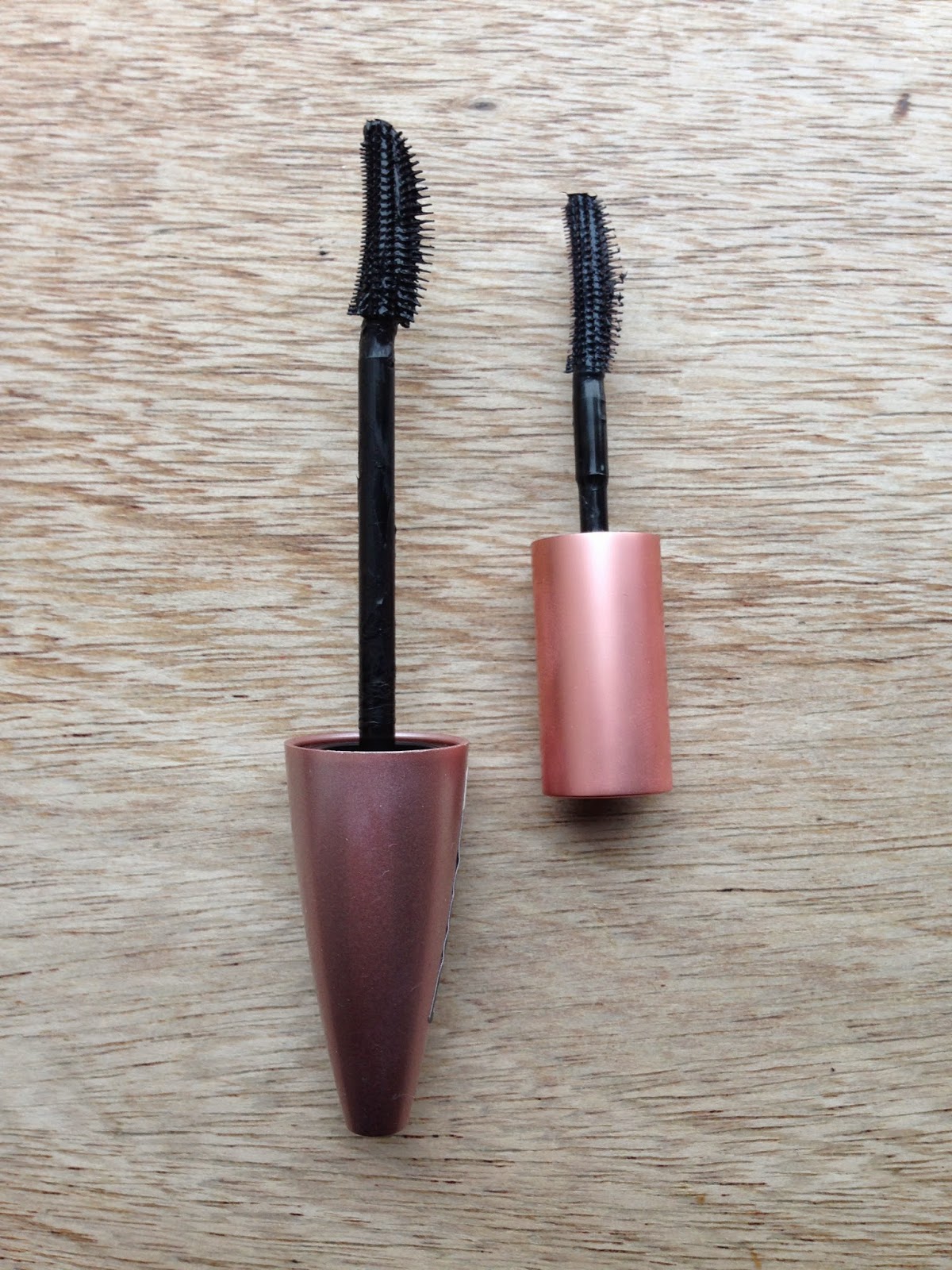 Obviously because the Benefit is a sample size, the wand handle is much smaller in size than the Maybelline, but you can see the similarities of the wand although again there is a size difference in the handle. 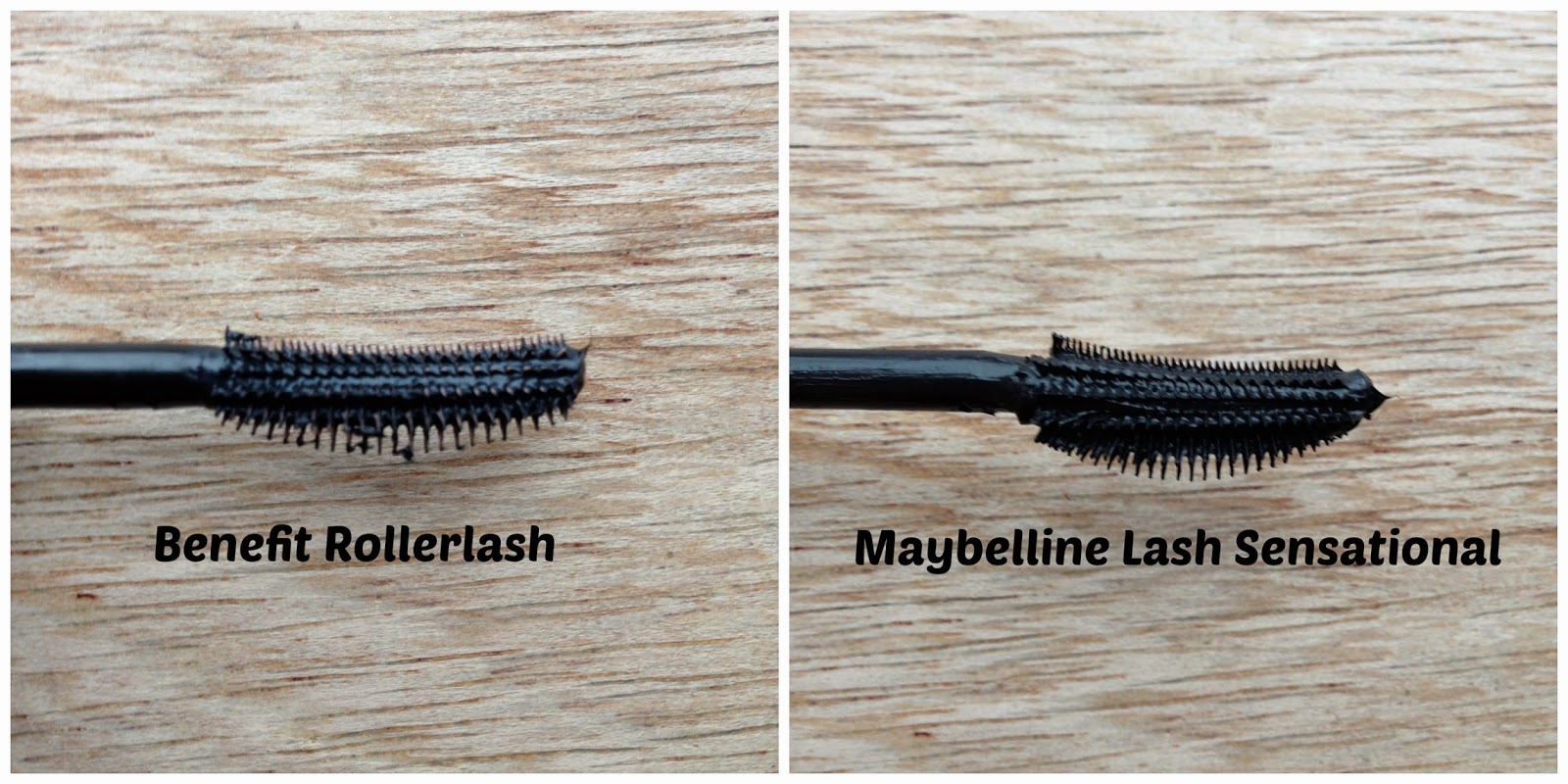 Close up of the wands

In the close up photograph above you can see the wands are very similar with the only real difference being that the Maybelline wand is a little more chunky than the Benefit wand. 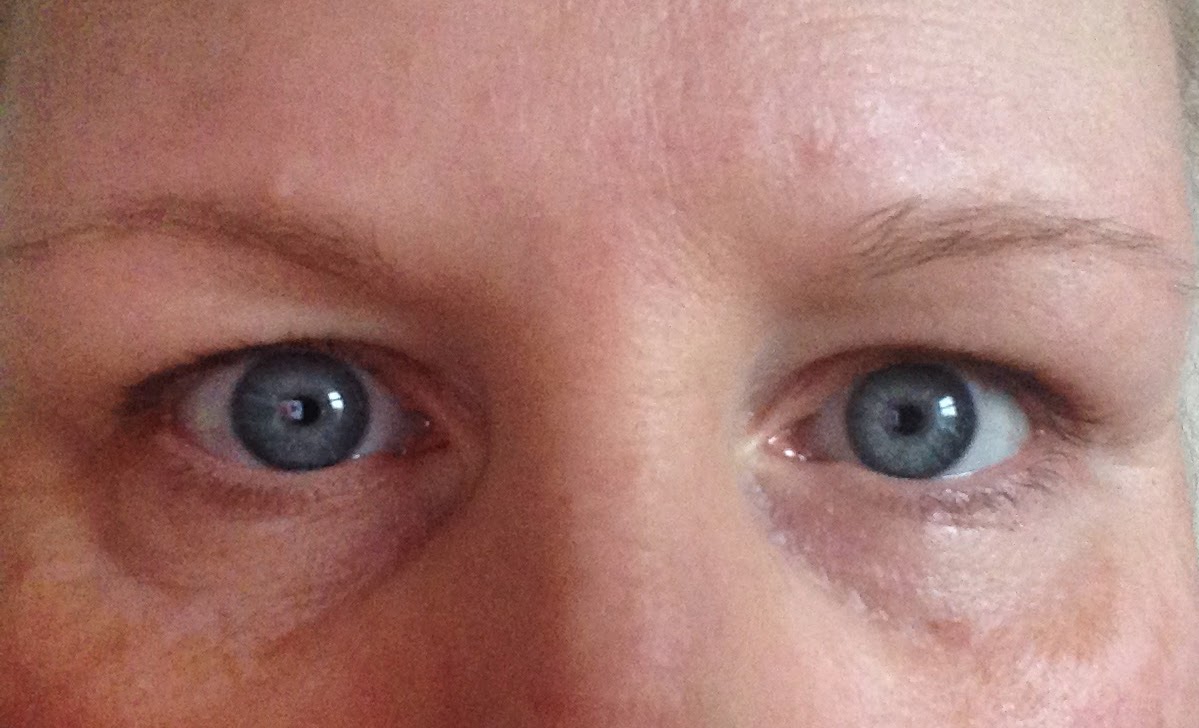 My lashes without any mascara, aren't they pathetic?

I have really pathetic eye lashes I really do so any mascara that promises length and fullness and I'm sold, I'm not too bothered about a curl or my lashes looking fanned out but it's a bonus if it works I suppose. As a rule I can only really wear waterproof mascara, I have a real problem with smudging or blobbing as I call it, and mascara loves to smudge or blob onto my socket bone and leave unsightly black marks on my make up, this happens with most mascaras unless they are waterproof, the only non waterproof mascara I have tried that doesn't blob is the Smashbox full exposure mascara. But usually unless a mascara is waterproof it will blob.

On first application I found both mascaras easy to use, both have a very wet formula but don't go all over the place when applying. I liked the wand on both products which is unusual for me because I don't usually like a plastic wand but I did like both wands. I noticed a massive difference when using both products for the first time, my lashes looked longer and fuller and with the Maybelline were nicely defined and fanned out but I didn't notice a curl with the Benefit. 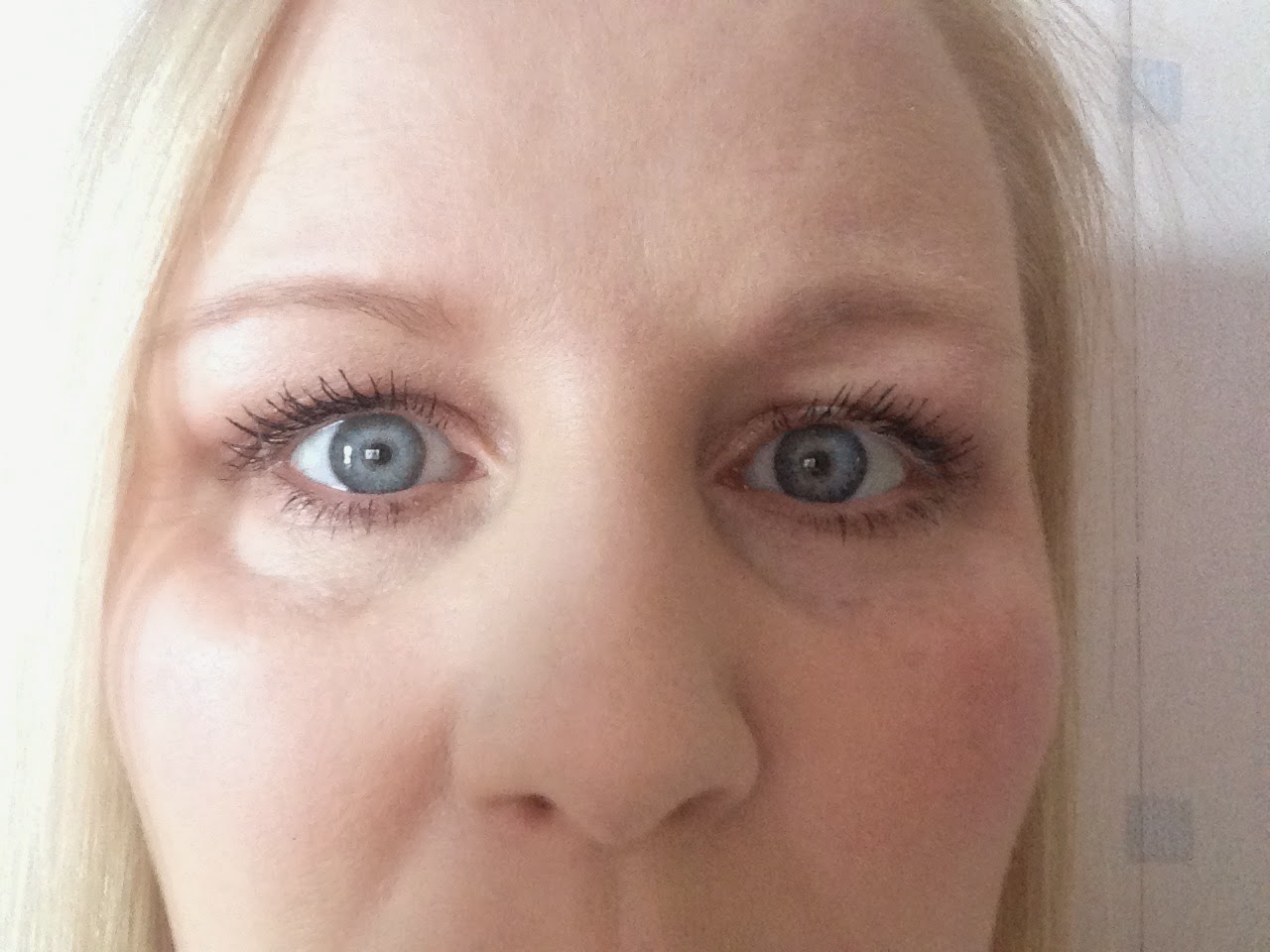 Wearing the Benefit mascara for the first time (2 coats) 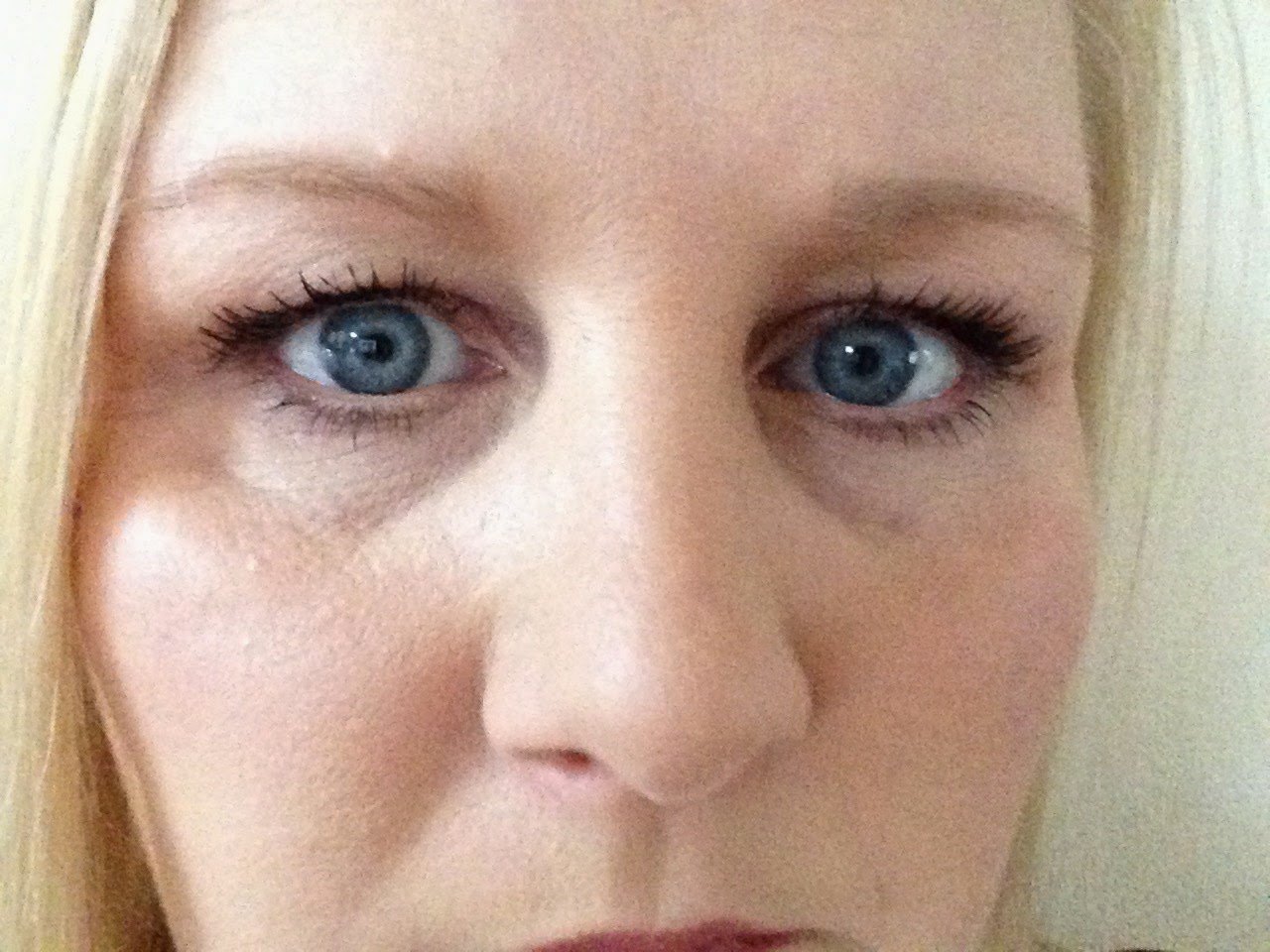 Wearing the Maybelline mascara for the first time (2 coats)

As you can see from the photographs above, both mascaras do give me length and fullness but I don't think I have any sort of curl from the Benefit Rollerlash, I took another photograph and uploaded it to my Instagram account and asked which my followers thought was a high end mascara and which thought was high street. 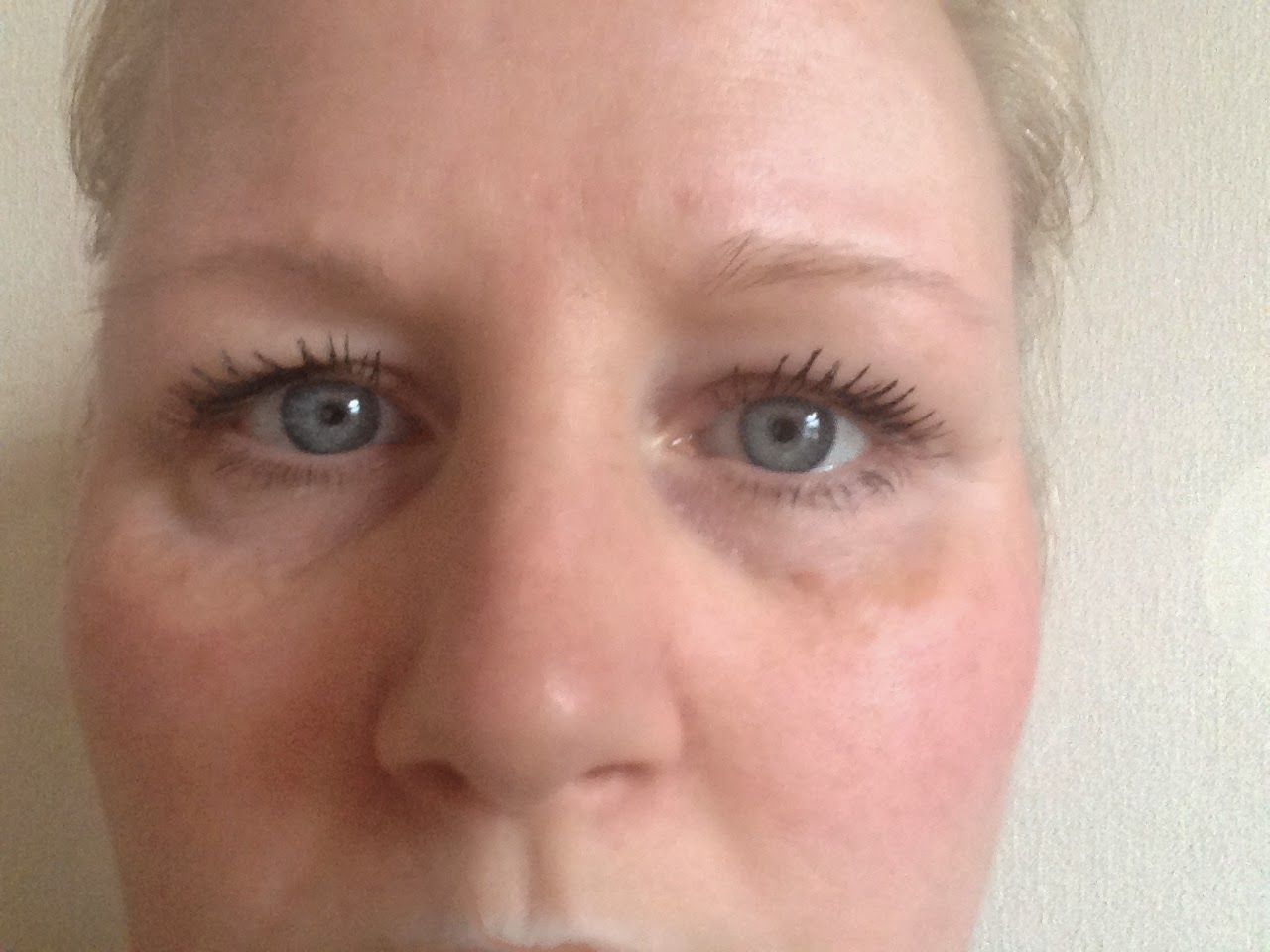 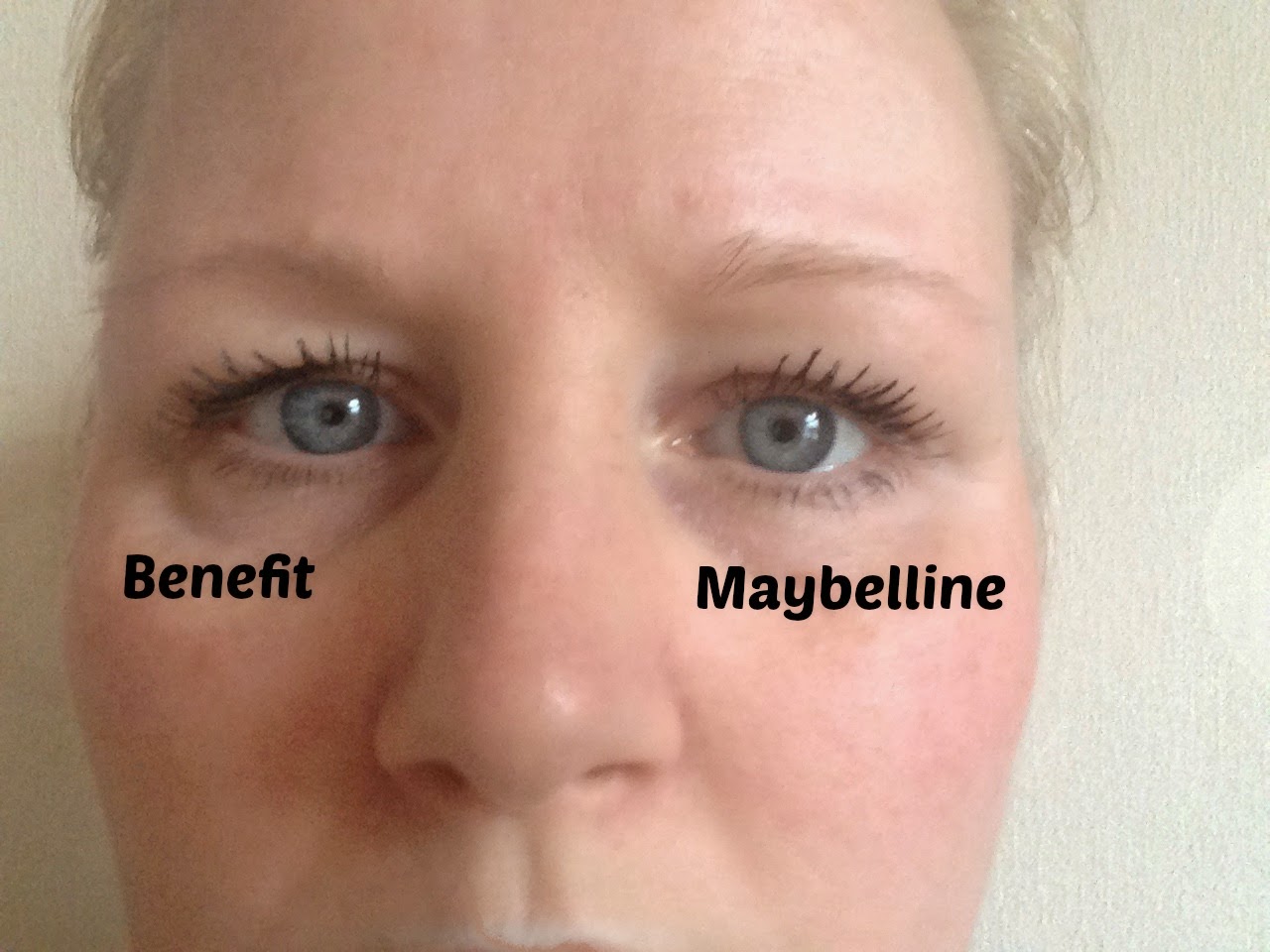 The mascara my Instagram followers chose as the high end product was in actual fact the Maybelline Lash Sensational mascara and the left was the Benefit Roller Lash. I think you can tell from the photograph that my lashes look much more defined and fanned out with the Maybelline and less "clumpy" too.

Overall I liked both mascaras but for the the stand out product was most definitely the Maybelline Lash Sensational, it did exactly what it said on the tin, it is far more affordable and the results were outstanding, don't get me wrong I did like the Roller Lash but it didn't blow me away and whilst it did give me length and fullness to my lashes, it didn't curl them and it just wasn't groundbreaking enough for me and I personally don't think it's worth the £19.50 price tag. Maybelline is the stand out winner here for me and is definitely a rival for the roller lash, the wands are similar the formula is similar and both promise similar things but for me the Maybelline stands out a mile and I would most definitely re purchase it.

My only negative about both mascaras is that they both blobbed on me, this as I said isn't unusual and something I expected since neither mascara is waterproof, if Maybelline bring out a waterproof version of the lash sensational I'll be a very happy bunny but for now I have found a way to make it work, so keep an eye out for that post coming soon.

I would highly recommend the lash sensational mascara, it does exactly what it says on the tin and is affordable, I haven't loved a mascara so much for a very long time.

It certainly does give the Roller lash a run for it's money!

Have you tried the Maybelline lash sensational mascara or the Benefit roller lash? Which was your favourite?