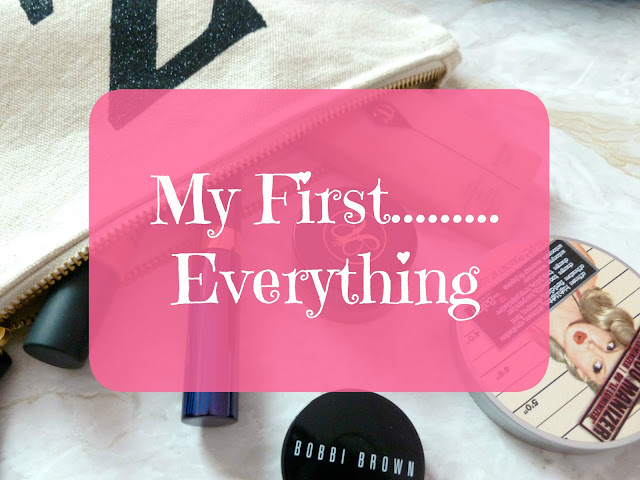 I love blog posts that enable me to find out a little bit more about the blogger behind the blog, especially if it's a blog I read regularly.  I saw a post on my friend Emmy's blog a few weeks ago called My First........Everything and I loved it, so much so I asked Emmy if she would mind if I also wrote the post, Emmy said no and of course I could, so here is my version of My First.........Everything, and make sure you check out Emmy's post too, you can find it here.

Memory - When I was born up to being 3, we lived in a house that backed onto a large farmers field. I remember playing in the garden and my dad accidentally throwing my beloved red ball over the fence into the farmers field, and the farmer running over it with his tractor!

Pet - Growing up we had a family dog, Sam. Sam was a black Labrador bred by my granddad and we had him until he was 15 and had to be put to sleep because he had cancer. My very own first pet though was a golden and white Syrian hamster called Valentine, I got her for my 12th birthday and my birthday is on Valentines day hence her name, not very original I know.

Friend - My first friend was a girl called Suzanne and randomly I can still remember that she was born on 29th February, we lost touch when we moved miles away to another area, I wonder if she still remembers me?

Kiss - My first kiss was a really quick and embarrassing kiss with a boy when I was around 13, to be honest it makes me cringe now as much as it did at the time ha ha.

Broken Bone - I broke my little toe and a small bone at the side of my foot when I was around 8 years old, I did it during a school swimming lesson and it really hurt, I told the teacher who clearly thought I was just moaning and then when it was home time I told my mum and then my dad when he got home from work. All night I kept complaining and my parents thought I was over reacting, until the morning after when the whole right side of my foot was black and blue. My parents had to take me to A&E and admit to them they hadn't believed it hurt so much, charming!

Drunken Night - My first drunken night is a rather embarrassing tale, it was a typical case of peer group pressure and at a school friends party when I was 16. Someone at the party brought Pernod and we all thought it would be a brilliant idea if we drank it, not wanting to look an idiot I joined in and then I then went home and tried to pretend I was completely sober whilst talking to my dad in the kitchen who obviously knew I was drunk, not long after coming home and trying to act sober, I threw up in the kitchen bin! I ended up looking much more stupid than if I had declined the Pernod and I have never touched it since and even now, the smell of aniseed makes me feel nauseous.

Celebrity Crush - My first celebrity crush was George Michael, I was a huge Wham fan and have loved George Michael since the age of 11.  I was devastated when he died and haven't been able to listen to his music without crying since. I never realised what an impact a celebrity I don't know dying would have on me.

Tattoo - I got my first tattoo when I was 26 and I had it done by Louis Malloy who is now well known for programmes such as London Ink, back in the day when I had my tattoo he wasn't well known but was very popular and I paid a deposit and was on a 6 month waiting list. I had 3 small stars at the base of my back, they are the same 3 stars that Victoria Beckham had after Brooklyn was born, she has now added to hers and has more. I still have my 3, I loved Victoria's and the meaning behind it, she had it done for her, David and Brooklyn, at the time I was a single mum and mine represents me and my girls.

Hair Disaster - When I was around 12 years old a new hairdressing salon opened up just around the corner from where we lived, the stylist who worked their was the daughter of someone my mum worked with so I booked in to have my hair cut. She made such a mess of my hair and I ended up with what was effectively, a short back and sides, it looked absolutely awful and I cried for days.

Holiday Abroad - My first holiday abroad was to Olhos De Agua in the Algarve, Portugal and it was lovely. I can still remember it now, my parents had split up then and my dad took me and my brother, we had a lovely time and caught a cat fish and wanted to keep it as a pet, funnily enough we had to put it back because it was none to happy being kept in an outside sink at our apartment. We went on lots of trips while we were there and we had a really lovely time, I have very fond memories of it and would love to go back one day, it was a beautiful place.

I really enjoyed writing this post, thank you so much to my lovely friend Emmy for allowing me to copy her post. I hope you enjoyed finding out a little bit more about me.

Emmy is not only my friend, she is a very talented blogger and blog header designer and Emmy is the person behind my new header, she creates amazing blog headers and I highly recommend her, she is extremely lovely too, you can check out some of the headers she has created here.

I hope you have enjoyed finding out some of my firsts, let me know some of your firsts in the comments.