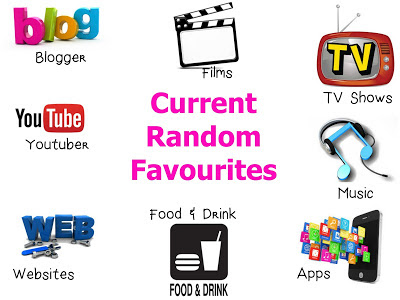 Today I have my current random favourites post, I have a few different categories including TV and Film, Food and Drink, favourite Blogger and favourite Youtuber amongst other things, so without further ado, I shall crack on with the post.

I haven't watched too many films recently, but one film I have watched was The Boy, it was really good and if you are a fan of horror films I recommend it, I say horror, it is more creepy/thriller style really, there's no gore it's just a bit jumpy and creepy but it was really good with a brilliant twist at the end.

For TV I have been loving Super Vet on C4, it's brilliant and follows the vet Noel Fitzpatrick who really is a super vet, he performs some incredible procedures and is a very clever man, there are some sad parts but also lots of happy endings too, if you like animals I think you'll enjoy Super Vet. I also loved Scott & Bailey, we have watched it since the very 1st series and loved it and we were sad to see it come to an end recently, I hope they bring it back one day. Another drama we love is In The Club on BBC1, it's back for a second series and follows the life of a group of couples who met at an ante natal class whilst pregnant, it's easy watching but really good, I highly recommend it. We also love Line Of Duty, that is in it's 3rd series I think and we hadn't ever watched any of the other series but my mum has and she recommended it to us and she said it didn't matter if we'd missed the other series' because this was a completely new series with new story lines. We watched it and we are hooked, it has actually finished on TV now, we recorded it and are watching it back but I know series 1 and 2 are on Netfix and hopefully series 3 will be on iPlayer. We have also been enjoying The Secret Life Of Puppies on C5,  this show is so cute! It follows the lives of a group of puppies from birth through their first year of life, there are all different breeds in the group including a cocker poo, a boxer, a labrador, a basset hound and a collie, I forget them all but they are all very cute indeed. Lastly something we watched recently is a documentary series called Women Who Kill with Piers Morgan, it probably sounds a bit odd but it was really interesting to watch, so far theres been two episodes and it's on ITV, the first episode is all about a girl who at 16 initiated the murders of her parents and 2 brothers, it was fascinating but at the same time unbelievable that someone could do that, we have recorded the second episode so have yet to watch that but if you like documentaries, I'd definitely give it a go.

One song I can't get out of my head at the moment is by 99 Souls, The Girl Is Mine, it features Destinys Child and Brandy, you may already know that myself and my daughters are huge Beyonce fans so it was inevitable I'd like it I suppose but it's really catchy, I even have it as my ringtone on my phone. You can listen to it by clicking the image below.

I have downloaded 2 apps recently, one is Buffer (Apple here & Android here) Buffer is really good for scheduling tweets, I was previously using Hootsuite but after the lovely Christina said she'd started using Buffer and it was easy, I thought I'd try it and I much prefer it to Hootsuite, it is much easier to attach images etc than Hootsuite and never fails to post the tweet which is something Hootsuite does regularly. Another app I downloaded is AliExpress (Apple here and Android here) I haven't actually used this app yet but someone I know does their own gel nails and they always look incredible, she has gems on them sometimes and glittery polish and they look lovely. Lissy had been having acrylic nails but her nails became very damaged so she had them removed and is trying to grow her nails at the minute because she wants to be able to do her own gel nails, we were asking where my friend gets her products from and she said AliExpress, she said it comes from China I think so takes a while, but she's been using them since just before Christmas, she bought a Sensationail kit from Boots  but found the polishes too expensive and someone told her about the app so she started to order from them and has done ever since, she hasn't had any problems with them at all and highly recommends them.

I haven't discovered any new websites recently I'm afraid but I have still been loving Boots for their free delivery to a store, it's so handy for me, I don't go out shopping and do all my shopping online, so it's brilliant for me. I can order from Boots online up to 7pm and it's at my local store the next day so Simon or the girls or my mum etc can pop and pick it up for me. I also ordered from Look Fantastic recently, they are a brilliant website and never let me down, I have shopped with them for years and their service is brilliant, it's free UK delivery and items only take a couple of days to arrive, I did order off Superdrug recently but wasn't impressed that the delivery took a week, it was free as I'd spent £10 but I think a week is a bit much, Look Fantastic is free delivery and it takes a couple of days so there is no need really, it could have been a one off so I'll see what it's like next time I order, it's been a while since I've ordered from them.

A drink I've been loving is Sainsburys own high juice cordial in Apple and Alphonso Mango, it is really nice, I have it with ice in and it is really refreshing, I'm not really one for cordials and only like a certain few but it is lovely. Simon does all the cooking and has started to make his own perinaisse, he makes his own take on Nando's and he usually buys the Nando's perinaisse from Asda but he said for the last month they haven't had any in stock so he bought mayonnaise and some of the Nando's sauce, he mixes it together to make a sauce,  it doesn't really taste like perinaisse but I think it's nicer and it's a cheaper way of doing it too, worth a try if you usually buy the Nandos perinaisse.

A you tuber I recently found is Steve's Vlogs, I found Steve's channel through my lovely friend Emma. Steve makes daily vlogs of his life, he has a partner Rachael and 5 lovely children, Jasmine, Sophie, Liam, Lacey and Chloe. As a rule I don't watch vlogs apart from my friends Emma and Khila and a couple of other people I know,  but I went over to Steves channel after Emma mentioned him and really enjoyed his video's and I've been watching ever since, he's a really nice man and his family are lovely too, it's nice easy watching and nice to catch up on their day.

My current favourite blogger is the lovely Ioanna who writes the blog Hearting, she is lovely and I really enjoy her blog. We tend to like the same things and she has been responsible for some of my recent haul purchases. She writes about beauty, baking, lifestyle and photography, she takes the most beautiful photographs, her images are stunning. She also owns some amazingly adorable Guinea Pigs who feature on her blog and Instagram feed, they are so cute, go and check her out, you won't be disappointed.